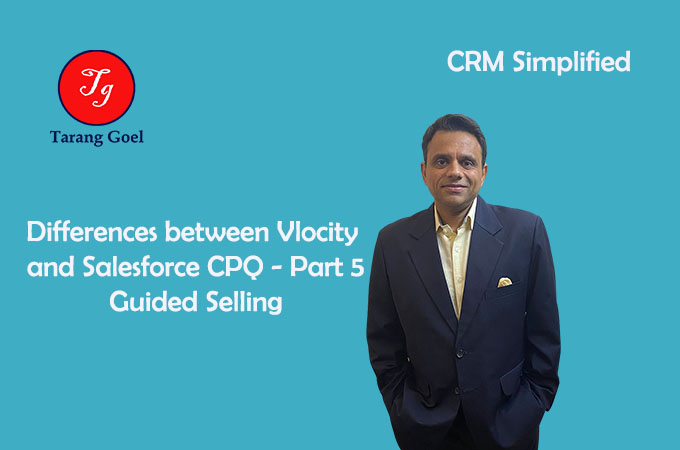 In this last part of this series, I will cover the Guided Selling process in the two applications and some other differences.  This will conclude the differences between Vlocity and Salesforce CPQ.

In case you have not gone through the series, you can start reading here.

Let us understand the guided selling process with the help of the following examples:

Example 1 – Imagine that you are a customer sales representative of a multinational company who takes orders on the phone. Customer A calls and wants a phone. He does not know what kind of a phone he requires, and you must help him find the right phone and place the order. You go to the products catalogue, start searching for various phones, tell him about each phone one by one, make several extensive searches with available filters and finally after spending a decent amount of time you zero in on the phone. Now you have to browse to the order section to add that phone to the order and place the order.

You add the phone to the order, specify the quantity only to realize that the phone is not available. It is showing out of stock and will be available after 15 days, but the customer needs a phone now. You risk losing the sale and time. This happened because as you added the product to the order, it did a real-time availability check. Now you look for another variant of the product, convince the customer to buy that variant, do an availability check and place the order. This whole interaction is quite stressful and has consumed a lot of time. This is one kind of a customer journey or a Sales Process.

Example 2 – Let’s look at the same process with the customer and representative going through a different journey. Customer calls and the ask to buy a phone from the CSR, CSR click a button hypothetically named as “Guided sales for Phone”. The system comes up with the list of questions about the budget of the customer, phone operating system, data usage, average screen time, current phone etc. Bad on the answers provided by the customer, the system comes up with 3 to 4 phone models out of a total of more 500 available.

What is Guided Selling?

Guided selling is a consistent shopping experience, which guides the customer or the sales rep through the process of recommending, selecting, and ordering products.

Vlocity digital interaction platform is used to create a user interface to visually guide the user from one screen to another to fructify the sales process, the data layer is used to fetch the right data, a Vlocity temporary cart know as a persistent cart is used to create the ordering experience in addition the generating the order header on the fly. What is also taken care of is the point of start of the guided selling process and the point of stop or return. For example, if the guided selling process is starting from the customer page then it can be configured to return to the same page after the process is over.

In a nutshell Vlocity guided selling can be classified in the following steps:

Salesforce example – User is in the quote object in Salesforce CPQ. User is trying to intelligently search products while creating the quote. The user is posed with some questions based on which the product is searched and recommended by Salesforce CPQ in the quote lines object. The questions which are asked of the user can be configured to appear at a different time of the quote experience and after different results.

Differences between the guided selling process in Salesforce CPQ and Vlocity

The snapshot and differences in no way provide that one solution is better then the other. This is not an apple to apple comparison as in their current forms both these applications are different and serve different purposes.

Overall, the Vlocity guided selling process is more advance and independent of the sales value chain. It focusses on creating an end to end experience for the customer. It is open-ended and can be easily configured to be multi-step guided process through the interaction platform and omniscripts with distinct start and endpoints. Salesforce guided selling process focusses on the quote and the quote lines and primarily filters the products.

Salesforce CPQ does currently provide out of the box functionality of Loyalty Points.

I hope that in this and the last 4 blogs, I have been to provide you with a snapshot and contrast between Salesforce and Vlocity CPQ solution. It is not an apple to apple comparison but still, a snapshot is definitely worth since they both offer CPQ solutions.